Shooting stars are one of the more unique things about 2009scape, and no, these are not from OSRS! With shooting stars in 2009scape, they serve as a point for the community to gather around and hang out while they break down the star, and offer some nice daily incentives for earning GP as well.

In order to participate in shooting star mining, you need a minimum of level 10 mining to mine the lowest level (level-1) star. This increases along with the star's size, capping out at a level 90 requirement for level-9 shooting stars.

The Ring of the Star Sprite is the very first functional (benefit-providing) custom item added to the game. Its appearance resembles a silver dragonstone ring wherein the dragonstone appears to be infused with stardust. According to 2009scape lore, Star Sprites actually used to make these for fun as a sort of hobby and hand them out to adventurers just for fun, until one of the adventurers used the ring to teleport onto a star sprite's star as he was flying away and caused him to crash st… for more info on them. In general, shooting stars are a fantastic way to gain mining XP and the only semi-afk option 2009scape offers for mining. There's a daily turn-in for the stardust that, at 200 stardust, rewards 50k and various runes. There is also an initial claim bonus for the first person to find and click on the star that scales to that player's mining level, which can result in a very hefty chunk of XP, especially on higher XP rates. Below you can find a table for each star's level, the experience given per stardust mined, the level requirement, the total amount of stardust that level contains, and that level's chance at rewarding a player with an ancient blueprint each time they mine some stardust.

Shooting Stars can land in a wide variety of locations and an announcement is made in chat when one lands, informing players of where they landed. Below, you can find a table detailing where each star lands based on the message it gives in the announcement.

On the 2009scape server it is tradition to wear a white mystic hat while mining the juicy moon rock. 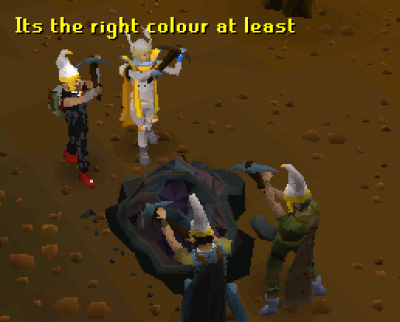 This is a community wiki written and maintained by the community. Please help expand the wiki, especially if you can help document the differences between 2009scape and RuneScape as it was in January 2009.